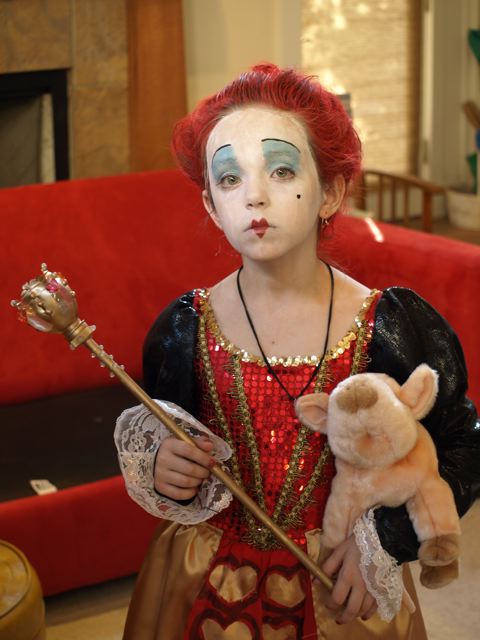 AS CHILDREN, my sister and I always had homemade Halloween costumes, so it’s no surprise that I became THAT mom. The one who goes all out to turn her kids into whatever creatures they want to become. And then posts the pics all over Facebook. Yeah, that’s me. I’ve got a glue gun and I’m not afraid to use it. 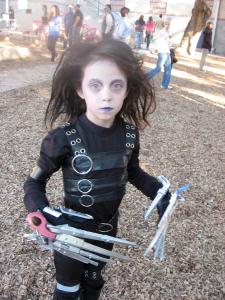 Of the two, my younger girl is more of a Halloween fanatic. No sooner has she said her last “Trick or treat!” and scored her final handful of Kit-Kats, than she’s already brainstorming about next year’s get-up. 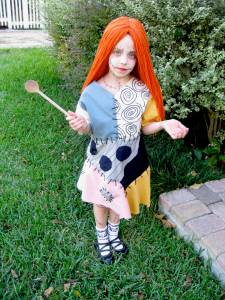 We’re huge Tim Burton fans, so in the past she’s dressed up as different characters from his films: Sally the Rag Doll from The Nightmare Before Christmas; Edward from Edward Scissorhands; and The Red Queen from Alice in Wonderland.

Her dad and I are somewhat artistically inclined, so we eagerly embrace each year’s new costume challenge. Collectively, we’ve logged many a midnight hour in service of cobbling together the coolest kid costume in the neighborhood.

We typically don’t mind burning the midnight oil for these creations, although they do take a bit of planning. Which of course means that we can never expect things to go exactly as we hope – especially when we factor in the simple truth that we are, after all, making a costume for a kid.

And you know what that means…

Right after Halloween last year,
she already had a plan
about her costume for THIS year,
how it’d be better than

the one she still was wearing,
so intricate and cool,
the one that prompted “Epic!” cries
from all the kids at school.

And so throughout the holidays
and in the brand new year
her costume thoughts and planning
were all that I would hear.

She talked of it past Valentine’s,
right through the end of spring;
in summer, she did research
on every little thing:

the outfit and accessories,
the make-up and the hair,
she even noted how to walk
and how to talk, I swear.

And then, when autumn finally came
and Halloween drew near,
‘twas time for me to organize
and get my act in gear.

Out came my pins and velcro,
my trusty hot glue gun;
and soon the fabrication
of her costume I’d begun.

After many nights of
cutting,
pinning,
stitching
and
glue gunning,
I proudly held that costume up
and it was…simply stunning.

So carefully I brought it
to her room for the revealing,
assuming that with pure delight
she’d soon be loudly squealing.

She met me with a smile
as she surveyed that fine creation;
Her reaction, though, I’m sad to say,
fell far short of elation.

Instead, she handed me a sketch
of a costume she’d designed:
A different one (to make tonight)
because 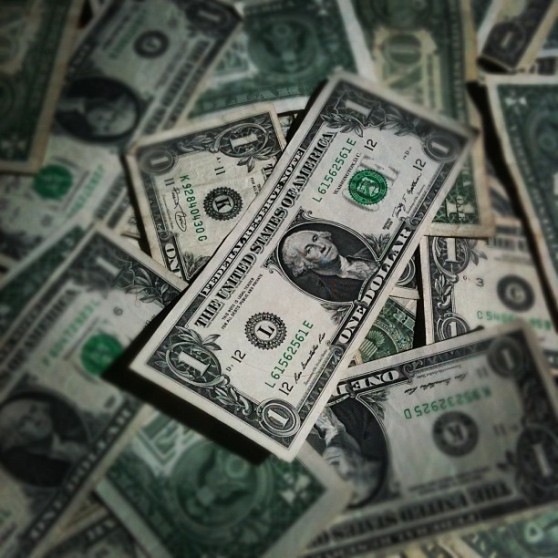 I work in advertising, but I admit that I’m not a particularly good salesperson.

And I wasn’t wild about peddling cowbells for my junior high booster club, or running my senior class Krispy Kreme sale.

So it’s not surprising that I abhor the first few weeks of each new school year, when my kids inevitably bring home the dreaded Fundraiser Packet.

Their dad is self-employed, so it falls upon my shoulders to schlep the order forms to my office and stalk my colleagues in their cubicles, trying to convince them to subscribe to magazines they won’t read and/or buy cookie dough that’ll contract freezer burn when it’s long forgotten in their fridges.

But each year, I suck it up, find my inner Ricky Roma, and get out there and SELL. After all, such things just come with the territory.

And I just happen to be Sales Director.

Who wants to buy some magazines?
Who needs some cookie dough?
If you’ve run low on frozen cakes
or chocolate bars, just let me know.

I’ll bring the glossy catalog
and order form right by;
I’ll bring a pen and recommend
which products you should try.

It’s for a worthy cause, you know –
it’s for my kid – for school;
because
their club
their band
their team
lacks funding, as a rule.

You probably don’t need pizza dough
or popcorn in a tin,
but don’t you care about my child
and prizes she could win?

So what if you’ve been dieting
and don’t need wrapping paper?
This is what we parents do
to coworkers and neighbors.

It just comes with the job, you see —
it’s like a type of hazing;
a particularly painful one
that’s known as school fundraising.

And rest assured, when your kid
comes around to sell his candy,
I’ll try to buy a bar or two —
Well…if my checkbook’s handy.