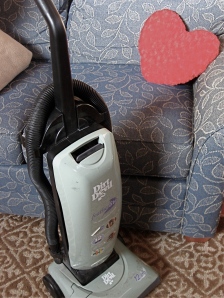 Our sweeties can treat us to flowers or jewelry or fancy dinners (or all of the above!) on Valentine’s Day, and we’ll be quite appreciative. But maybe they should be breaking out the rubber gloves and Mr. Clean instead. For, according to recent studies, women are more likely to feel amorous when their partners help out around the house. The media’s even created a term for the phenomenon: chore-play.

It makes sense to me. Who can focus on romance with a stack of dishes in the sink, or dust bunnies under the bed? And even though it’s the 21st Century and gender roles have been evolving for decades, the majority of housework still falls upon the woman’s shoulders.

So guys, take note. After you place that call to the florist, you might want to give these folks a call, too. Or dust off that dust pan and get to it.

I don’t want diamonds
or rubies or pearls
in settings all agleam.

I don’t want wining and dining,
not even a home-cooked meal.

I don’t want a mani or pedi,
a facial or a massage.

A night out dancing won’t do it,
nor a night in a snow-laden lodge.

No, give me a tidy white kitchen,
a bathroom that’s pure and pristine,
a living room swept till it’s spotless,
with the cleanest floors I’ve ever seen.

Lure me into a boudoir that’s straightened,
on a neatly made bed I’ll recline;
for your dusting has turned me to lusting
and I’ll be your Valentine.
.